Ron Lindsay sends his apologies but due to illness he will not be able to make this lecture. Please keep him in your thoughts for a quick recovery.

The Necessity of Secularism: Why God can’t tell us what to do.

CFI President Ron Lindsay will be discussing his new book, which will become available on December 1, 2014. (Copies will be on sale at the talk.)  The central thesis of The Necessity of Secularism is that in a religiously pluralistic society, a robust, thoroughgoing secularism is the only reliable means of preserving public order and freedom for all. Secularism is not just another term for the separation of church and state. Secularism implies not only a secular state but a secular society, that is, one in which religion remains in the private domain. In particular, religious precepts should have no place in public policy debates. Using religious precepts as a basis for discussing public policy shuts down the conversation: you can’t dispute someone’s faith and the religious precepts are relevant only to those who already accept them. With respect to the claim that we need to consider religion in connection with public policies that have moral implications, that claim assumes morality is based on religion, and The Necessity of Secularism decisively refutes that claim.

The Necessity of Secularism shows how secularism works to everyone’s benefit and makes the definitive case that the secular model should be feared by none—and embraced by all.

About Ronald A. Lindsay:

Ronald A. Lindsay, J.D., Ph.D. is president & CEO of the Center for Inquiry. He is by training and experience both a lawyer and a philosopher. An honors graduate of the University of Virginia School of Law, he practiced for twenty-six years with the national law firm of Seyfarth Shaw LLP prior to joining the Center for Inquiry, where he has been president and CEO since June 2008. Ron Lindsay received his Ph.D. from Georgetown University, specializing in bioethics. He has had articles published in peer-reviewed journals such as The Journal of Law, Medicine and Ethics, the Kennedy Institute of Ethics Journal, and The American Journal of Bioethics. His first book, Future Bioethics: Overcoming Taboos, Myths, and Dogmas, was published by Prometheus Books in June 2008. He is also the author of the entry on “Euthanasia” for the prestigious International Encyclopedia of Ethics (Wiley Blackwell 2013). In discussing issues of concern to the secular community, he has appeared on CNN, Fox News, HuffPost Live, and numerous local television and radio stations, and he has provided commentary to the Washington Post, the New York Times, and many other newspapers and magazines. 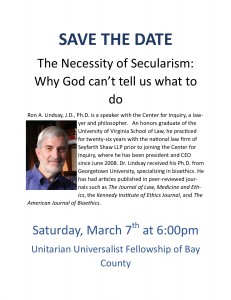 “This event is co-sponsored by Council For Inquiry – On Campus at Gulf Coast State College, Dr. Richard Baldwin, faculty advisor”