Master Drummer Zorina Wolf and ethnic flutist Paul McAuliffe will present a program of joyful noise at Unitarian Universalist Fellowship of Bay County (UUFBC) on Sunday, May 5, directly after the potluck luncheon.  Be ready to dance!  “Love Offering” donations will be cheerfully accepted, with half of the proceeds going directly to UUFBC.
Zorina Wolf lives in Washington State, has been playing the drum for more than 20 years and teaching drum classe 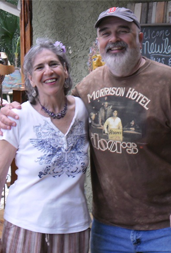 s for the last 17 years. She began drumming when she met and became the student of her longtime mentor, Nigerian master drummer, Baba Olatunji, and studied with Baba for 15 years until his death. Zorina is a proponent of Whole Person Drumming. If you haven’t heard her before – or even if you have – you’re in for a treat! She drums, sings, chants, and plays a wide variety of percussion instruments.
Our own Paul McAuliffe performs throughout the Southeast on a wide variety of wooden and bamboo flutes. He’s a member of the Mother Earth Drummers and loves to drum almost as much as he enjoys playing flutes. Last fall he performed his original flute and drum compositions in the Gulf Coast State College production of Shakespeare’s “A Midsummer Night’s Dream.”